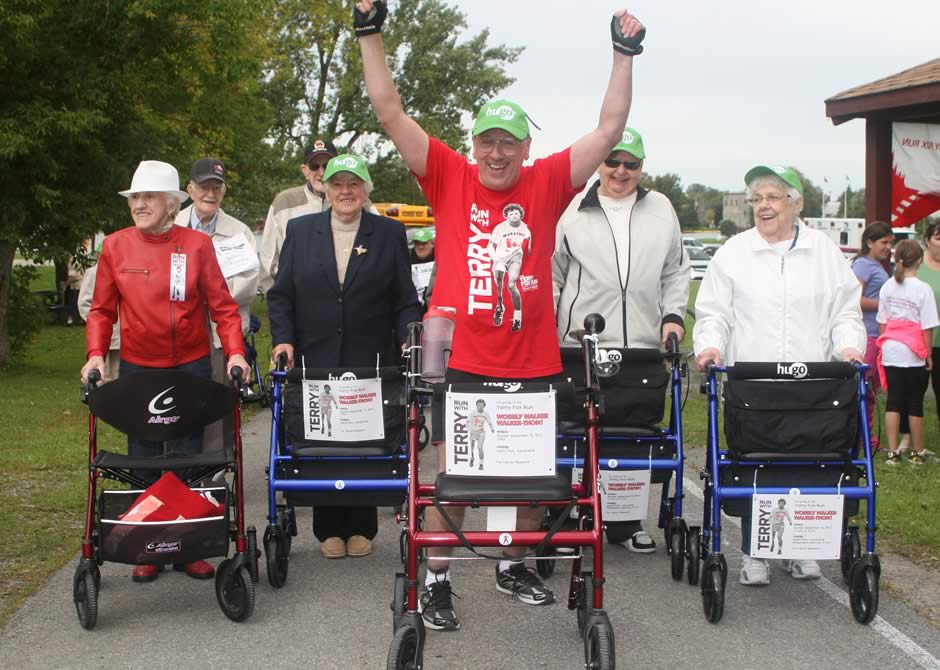 Meet Bob the hero he created the Wobbly Walker Walker-thon

Multiply-skilled Bob Hardy, 63 years old, is a true renaissance man. Not only has he mastered a myriad of arts including a Ju-Jitsu black belt, classical composition and clarinet, he also began serious marathon cycling after surviving Leukemia and stroke, to help him “get over” his cancer. 12 years, 19 marathons and 15,072 miles (24,257 kilometers) later, a balance condition forced him to retire his Cervelo Soloist and find a new outlet. Knowing firsthand the power of being active, Bob ingeniously turned his rollator into a “fundraising vehicle” and designed a marathon adapted to the needs of people who walk with assistance. 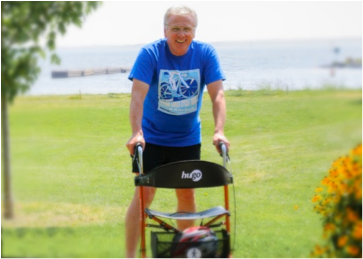 Bob and his Sidekick

Can you describe your athletic accomplishments and the motivation behind them?
When I was diagnosed with leukemia, I thought I had 6 months to live. I thought about what I should do in those 6 months. But then I found out there was some help to come from the hospital, in the form of a bone marrow transplant. That was May 23, 1997. 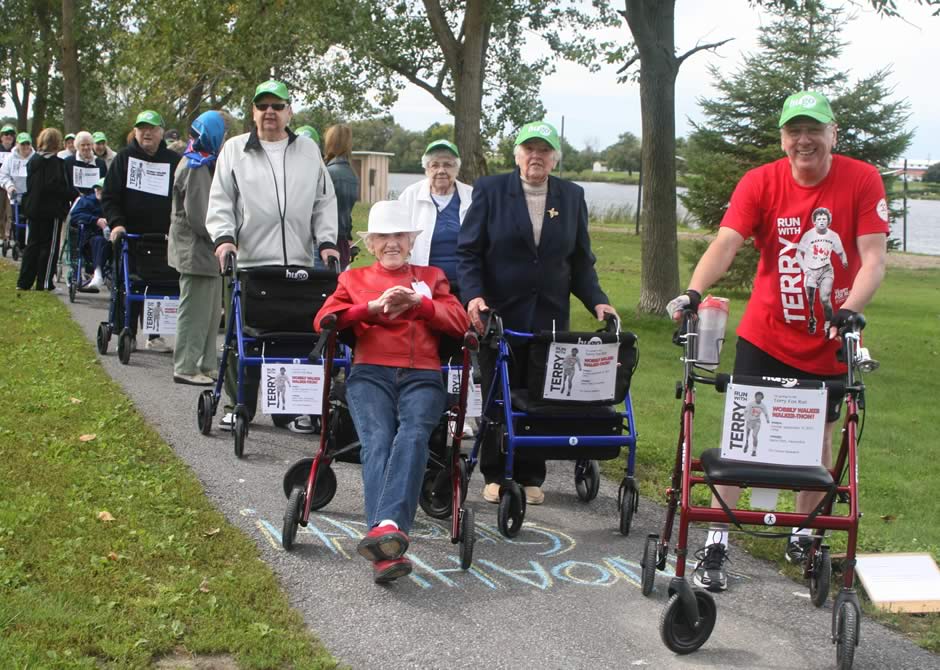 As I had already done some cycling marathons including one while I had leukemia, I went back to it as a way to get on with life after my battle with cancer. Between 2001 and 2012 I completed 19 marathons and cycled more than 14,900 miles (24,000 km). My first marathon after recovering from cancer was the 220 mile (354-km) Rideau Lakes Tour from Ottawa to Kingston and back. I completed the event in 16 hours and 48 minutes, which is pretty good for a first time. I was pleased and it was great to be alive as well. I competed in every Rideau Lakes Tour from 2001-2007.

My first fundraiser was for Little Angles Blood Cancer Fund, a charity I worked with at the hospital which helped fund families in need, because being sick is very expensive. The medications, the travel, people don’t understand all the costs involved in being sick. And then the people at Terry Fox approached me about creating a challenge for our local Alexandria contingency. I organized and competed in every 75-mile (120-km) Terry Fox Challenge from 2001-2007. I had to take 2008 off because I had my hip replaced in November 2009. I came back in 2010, 2011 and 2012 with a shorter 31-mile (50-km) challenge. 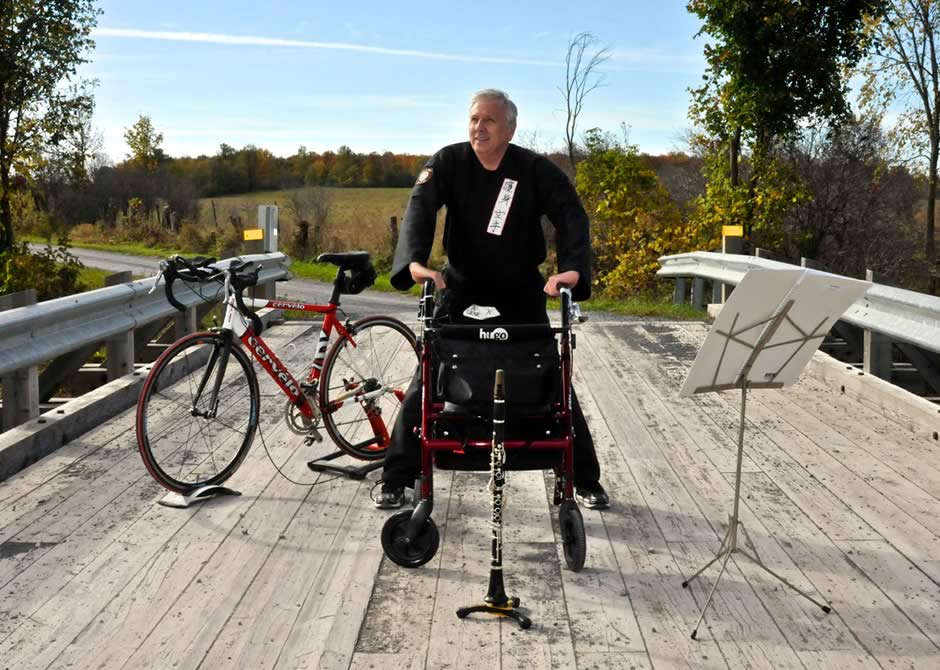 
In 2012 while training for the World Transplant Games, I got sick with a pain in my stomach and then spent 3 months in hospital with problems related to blood clots on the intestines. I was admitted to hospital on October 21, 2012. For 40 hours they couldn’t find the problem. All I knew is that I was very sick and in a lot of pain. On October 23rd emergency surgery was completed in Cornwall, the stomach was opened up and 6 feet of intestine was removed and they tried to remove the blood clot. 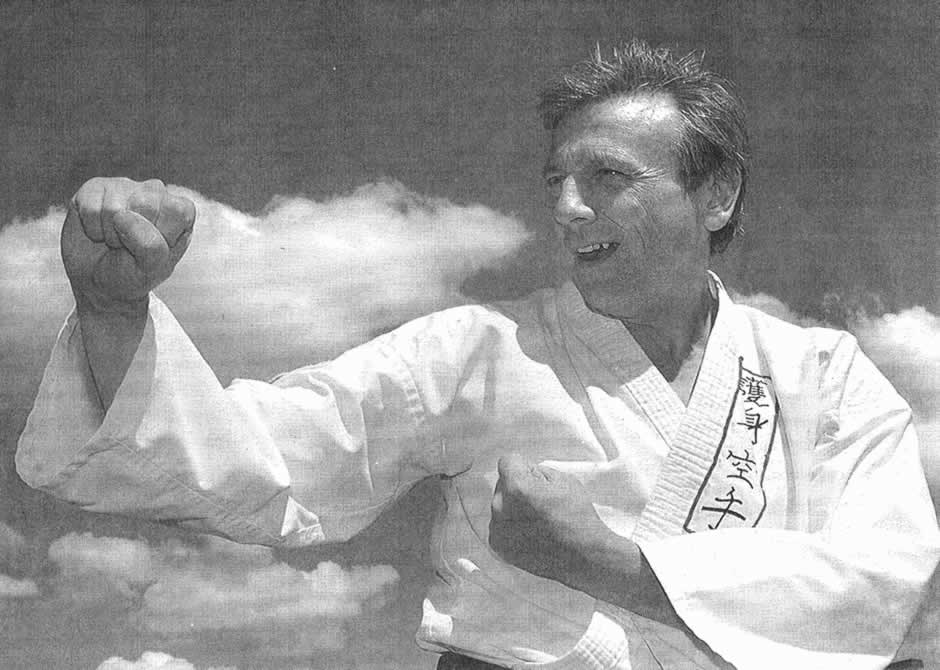 Subsequently I needed two more emergency surgeries and was left with a balance condition. First it just felt like dizziness and then the balance got worse.   When I left the hospital in January 2013 my balance was completely off and I felt very disoriented and dizzy. I could not get around at all and it was very frustrating and it was getting very depressing because I couldn’t get any exercise in. I was trying to walk using 2 canes and I could only walk two blocks. The two blocks were already dangerous because I would fall over. 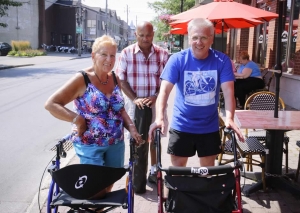 My doctors and other people suggested that I should get a walker. I saw the walker at the pharmacy my wife said, “Why don’t you buy one?” I just felt humiliated coming down from racing bicycles to walking with a walker. When I got over the humiliation and purchased it I felt freedom. When I went to my doctor I said, “I just feel free, I can do anything I want now.” 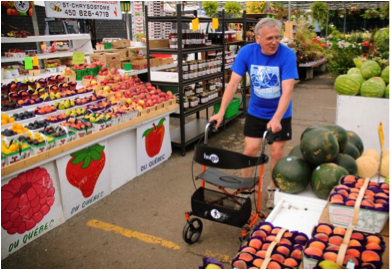 I can go shopping on my own. I put an average of 3 miles to 4.5 miles (5 km to 7 km) a day on my walker because I enjoy walking around and feeling free. And that’s what it’s done for me. It’s also given me a different, more positive attitude towards my problem so if this is a permanent issue I can still have a good life and still get around, even with a wobbly head.

What brought you back to community work? 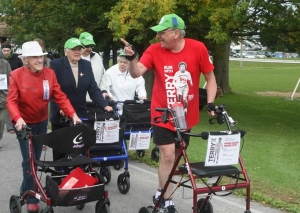 I could move around fast with the rollator. Because of the walker I can even walk competitively. Being a very competitive person and formerly racing bicycles I got into racing my rollator. My fastest so far is a 6.8 mile (11 km) route in 1 hour and 15 minutes with the assistance of the walker. I decided to approach my Terry Fox friends with the idea of a walker-thon called the Wobbly Walker Challenge. I also wanted to get people who need walkers to walk with me as far as they can. 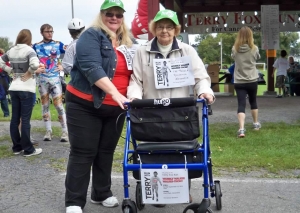 The First Ever Wobbly Walker Walker-thon took place at Alexandria Island Park on September 15, 2013 and it was a huge success. 28 participants were bused in from several of the local nursing homes and retirement community groups. Everyone that borrowed a Hugo rollator because they didn’t own their own walker despite having a mobility problem got to go home with it. Hugo also handed out canes and winter walking aids. 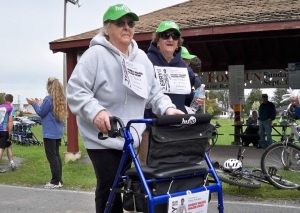 The next walker-thon is happening at the Alzheimer Society Walk For Memories on January 26, 2014 on the walking track of the Glengarry indoor sports complex.

I was described as the Pied Piper during the Terry Fox Wobbly Walker-thon leading the walkers with walkers around the park. 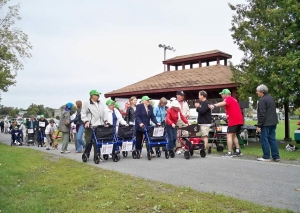 For the Alzheimer’s walk I have included music for the Victory Lap #106. I will be leading the procession of walker walkers playing my clarinet, accompanied by Ian McIntosh (ukulele) and Katie Smith (vocals). Hugo provides walkers for the events. Hugo sponsors the events.

Plans for future walker-thons are underway with more details to come.

Your goal for this walker-thon is 13 miles (21 kilometers) in 2.5 hours. What kind of training have you done to prepare yourself? 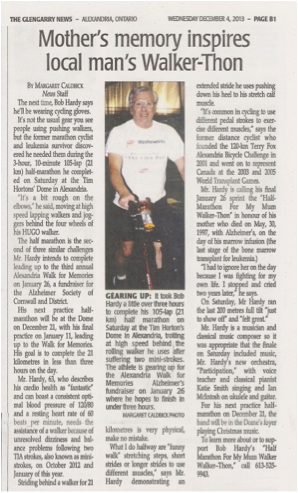 For the Alzheimer Walker-thon, I have completed two 13 mile (21 km) training walks and one 9 mile (14 km) training walk. This weekend was my last opportunity to put the pedal to the metal and achieve a time I would feel good about. January 10th 2014 I completed my personal best so far, 13 miles (21 km) which is 105 laps in 2 hours and 40 minutes.

What about your future plans?

This may well be my last walker race. My balance is getting better. Why am I getting better? Because I move (a lot), drink a lot of water and eat real food. This summer I will be racing in the nationals either on my bike or with my walker.

Join us! Bob’s friends at Hugo Mobility will be cheering him on from the Hugo Mobility water tent. Meet the instructors at Yoga Bliss and yoga guru Dr. Bali who still leads an exemplary lifestyle in his nineties! http://www.yogabliss.ca